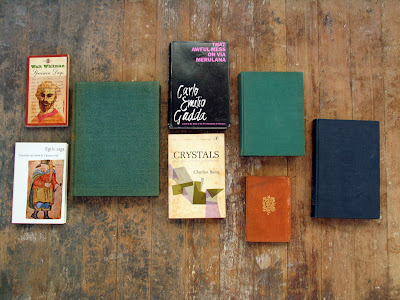 It seems that every day finds a book, or more, on the Library's doorstep. Pictured above are just a few of the newest acquisitions to the Borges, Calvino and Smithson Collections. Included in the new acquisitions are:

Robert Smithson Personal Library:
Thoreau as World Traveler by John Aldrich Christie, Crystals: Their Role in Nature by Charles Bunn, Roland Barthes' Elements of Semiology and The Origin of the Zodiac by Rupert Gleadow. 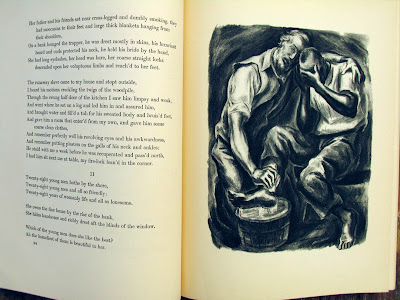 This beautiful edition of Whitman's Leaves of Grass is found in both the Calvino & Borges Libraries. It is a "Book of the Month" Book illustrated with expressive lithographs. Also found in the book was the following printed matter- all letterpress printed- which has found its way to the Personal Libraries Library Archive. 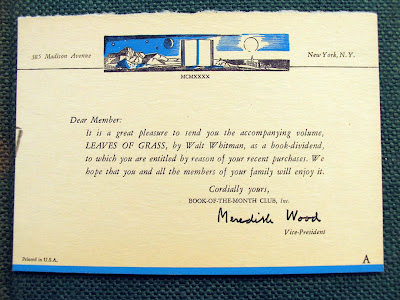 James Joyce's Ulysses is also in both the Calvino and Borges Collections. Both wrote extensively about this novel, at one point Borges wrote, "Perhaps, for the future, the only achievement of "modern" literature will be the unfathomable Ulysses, which in some way justifies, includes, and goes beyond the other texts." (Selected Non-Fictions, 312.) Possibly Borges found this book disconcerting. 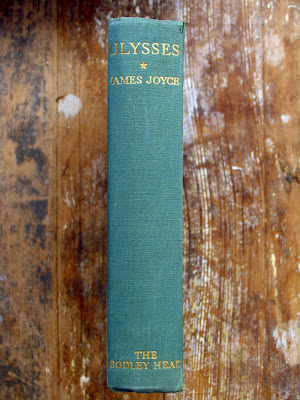 Lastly, is this sweet edition of Thomas Carlyle's On Heroes, Hero Worship and the Heroic in History. Carlyle is particularly interesting to the PLL, as he opened the amazing London Library in London in the 1840s. The London Library remains the "largest independent membership library in the world." (Patience & Fortitude, Nicholas Basbanes, 207.) Finding Carlyle as a kindred spirit whose labors made the PLL possible, his mini-tome is quite special. 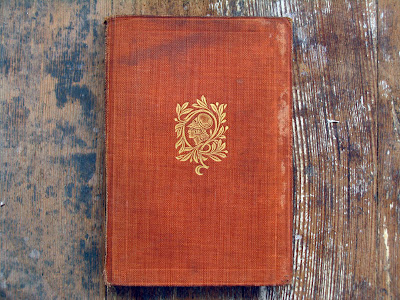 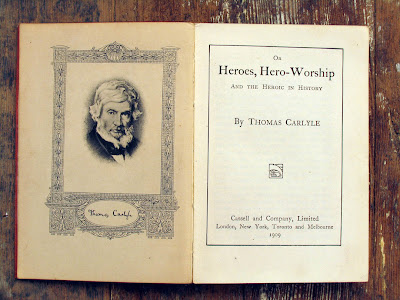 Posted by Personal Libraries Library at 12:31 PM No comments: 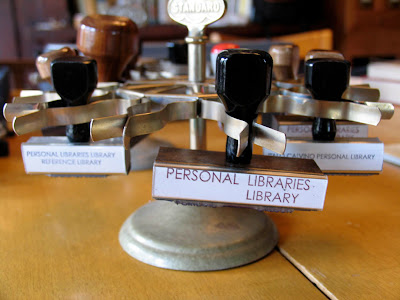 The May Reading Room Hours were a success! New members joined, books were checked out and many members stopped by to see the collections. As a by-product of being located next to the King Neighborhood Farmers Market- the Library even had some non-members wander in. 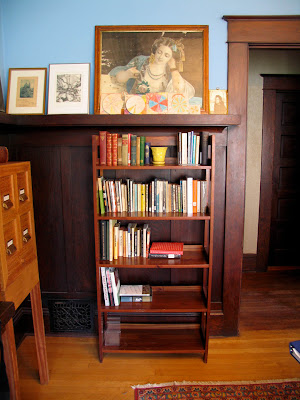 The Reading Room will not be open during June & July so that the PLL Librarian can travel to Belgium and the Netherlands; where many trips to libraries there will occur! Please look forward to attending the Reading Room Hours in August.

Posted by Personal Libraries Library at 12:23 PM No comments: