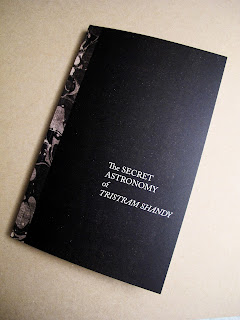 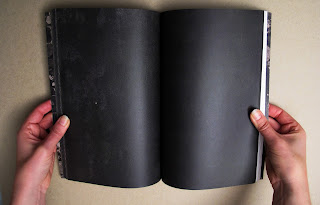 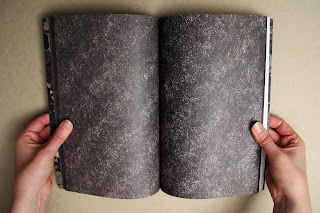 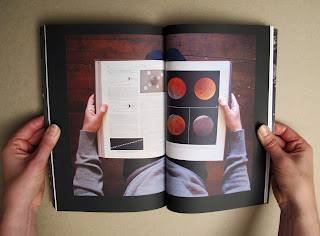 The Secret Astronomy of Tristram Shandy is a book that reproduces over one hundred, self-reflexive black pages from multiple, paperback editions & copies of Laurence Sterne's The Life and Opinions of Tristram Shandy, Gentleman. When taken out of context and accumulated, these once playful, visual metaphors reveal the printing inconsistencies of ink on paper (varying density, hickeys, oxidation spots, and moiré patterns). The hidden nature of the page, that which was unread, can now be read. In this case, astronomical imagery is revealed; that of stars speckled across an inky blackness or the soft haze and ripple of a galaxy. Since the 1760s, readers, printers and publishers have been forced to grapple with the black pages of Sterne's novel; this struggle with discovery, meaning, and craft is at the heart of The Secret Astronomy of Tristram Shandy.

The Secret Astronomy of Tristram Shandy can be purchased through c3:initiative, at the 2015 Portland Publication Fair, or by contacting the artist at personallibraries {at} gmail {dot} com for $70 USD.

The Secret Astronomy of Tristram Shandy is funded in part by the Regional Arts & Culture Council. 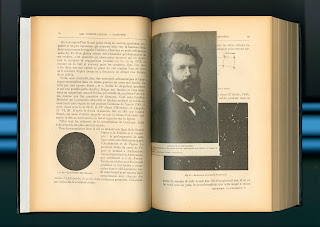 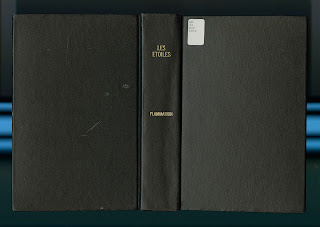 When Looking Down is Looking Up is an ongoing investigation of the shift from outer space to page as a re-envisioning of matter and printed matter. It centers on how when contemplating what is known and unknown, one usually finds themselves either staring down at the page or up into the sky. The viewing at c3:initiative from December 12, 2015 to January 17, 2016 will include photographs and book works.

I would like to thank Shir and Erin at c3:initiative for supporting When Looking Down is Looking Up and The Secret Astronomy of Tristram Shandy, as well as Publication Studio for continued support and for organizing the Publication Fair.

Labels: c3:initiative, Publication Fair, Publication Studio, The Secret Astronomy of Tristram Shandy, when looking down is looking up 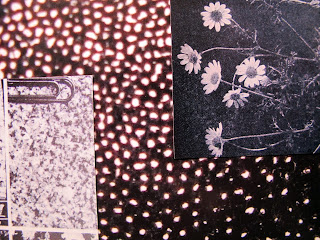 The December 2015 PLL Printed Matter has been mailed out to members and friends. 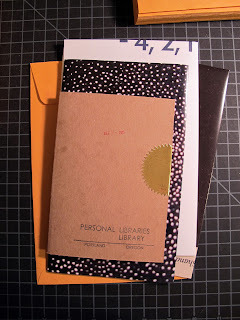 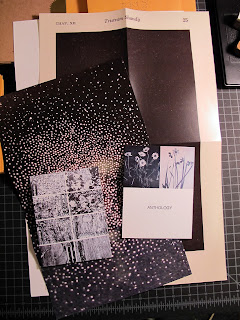 All members receive packets of printed matter twice a year. If you would like to join the Library and receive this matter too, please contact the Librarian at personallibraries{at}gmail{dot}com. If you just want some printed matter, you can purchase a la carte, please contact the Librarian at personallibraries{at}gmail{dot}com. 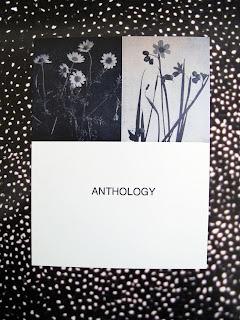 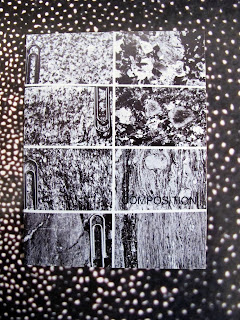 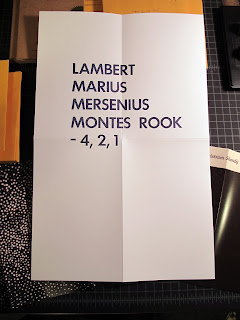 Posted by Personal Libraries Library at 2:39 PM No comments:

Labels: 2015, 6 year anniversary, anthology, composition, printed matter, when looking down is looking up 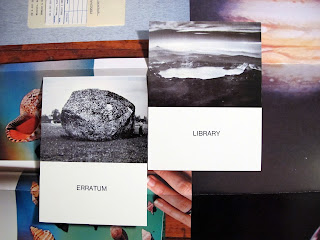 This summer's printed matter went out a little late - but it did happen! By now, all members and friends of the Library should have received the latest bundle. 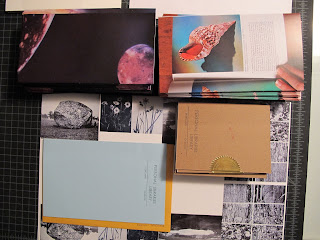 It includes the newest posters in the Entering the Robert Smithson Personal Library series, from the incredible, saddle-stitched book of taxonomy, Shells and Shelling: 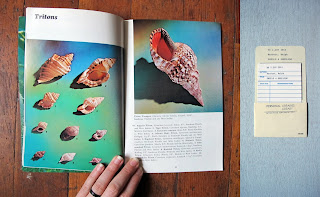 It also includes the newest from the When Looking Down is Looking Up poster series: 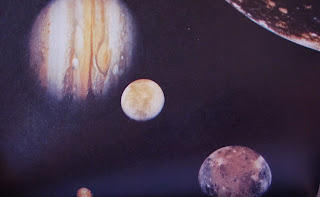 And the following small, letterpress and digitally printed cards: 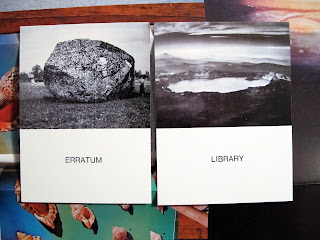 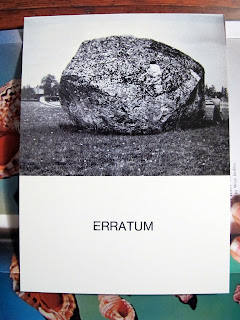 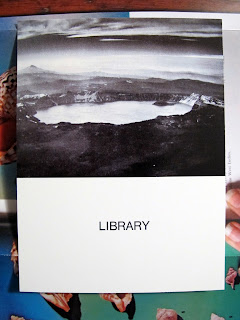 All members receive packets of printed matter twice a year. If you would like to join the Library and receive this matter too, please contact the Librarian at personallibraries{at}gmail{dot}com. If you just want some printed matter, you can purchase a la carte, please contact the Librarian at personallibraries{at}gmail{dot}com.
Posted by Personal Libraries Library at 6:27 PM No comments: 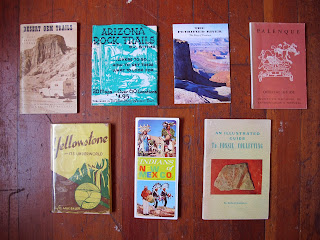 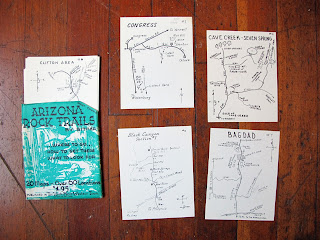 So many books and booklets! New acquisitions include the (above & below pictured) fossil, gem, rock and travel booklets from the Robert Smithson Collection: 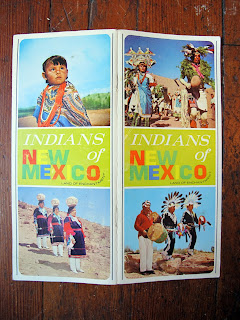 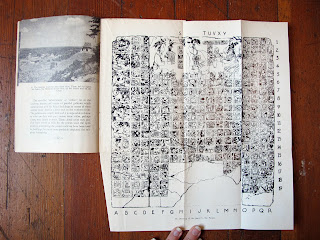 An illustration from Ruz's Palenque. 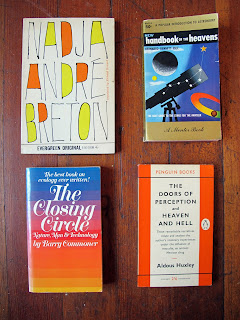 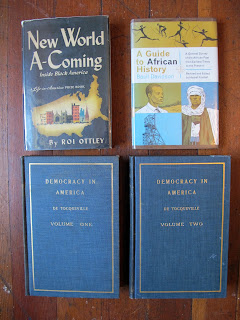 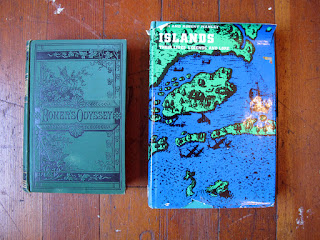 The Odyssey by Homer (above) and The Geography of the Heavens by Elijah Burritt (not pictured) are the newest books in the Maria Mitchell Collection.

Rounding out this group of books are Seon Manley's Islands, Their Lives, Legends & Lore and A Critique of the New Commonplaces by Jacques Ellul - both in the Robert Smithson Personal Library. 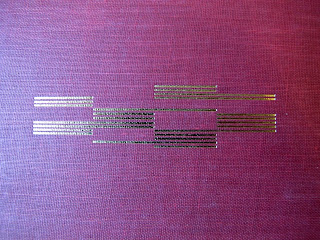 For any questions about the Library, the Collections, membership, or to check out a book, please contact the Librarian at personallibraries{at}gmail{dot}com.
Posted by Personal Libraries Library at 4:16 PM No comments: