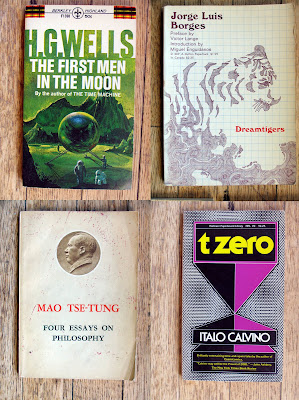 The Personal Libraries Library has been busy acquiring books for the Robert Smithson Personal Library. These new acquisitions include: t zero by Italo Calvino, Dreamtigers by Jorge Luis Borges, Four Essays on Philosophy by Mao Tse-Tung, H.G. Wells' The First Men in the Moon, and Language as Symbolic Action by Kenneth Burke.

t zero, a collection of short stories that contemplate the creation and evolution of the universe (a sequel to Cosmicomics), has an amazing short story that was most likely of interest to Smithson named Crystals. It follows Qfwfq (the main character of these stories) as it commutes from New Jersey to New York through prisms, crystals, lava & magma. The journey is not only a lesson in entropy but also stretches the boundaries of time:

"It could have been different, I know,- Qfwfq remarked,- you're telling me: I believed so firmly in that world of crystal that was supposed to come forth that I can't resign myself to living still in this world, amorphous and crumbling and gummy, which has been our lot, instead. I run all the time like everybody else, I take the train each morning (I live in New Jersey) to slip into the cluster of prisms I see emerging beyond the Hudson, with its sharp cusps; I spend my days there, going up and down the horizontal and vertical axes that crisscross that compact solid, or along the obligatory routes that graze its sides and its edges." (t zero, Italo Calvino, Harcourt Brace Jovanovich:1967, pp. 28-29)

Crystals is reflected (whether directly or coincidentally) in Robert Smithson's own writing, most specifically in his 1967 work, A Tour of the Monuments of Passaic, New Jersey, when discussing the landscape that he was viewing, recording and monumentalizing:

'That zero panorama seemed to contain ruins in reverse, that is - all the new construction that would eventually be built. This is the opposite of the "romantic ruin" because the buildings don't fall into ruin after they are built but rather rise into ruin before they are built. This anti-romantic mise-en-scene suggests the discredited idea of time and many other "out of date" things. But the suburbs exist without a rational past and without the "big events" of history.' (Robert Smithson: The Collected Writings, Jack Flam ed., University of California Press: 1996, p. 72)

Members can check-out these new acquisitions by contacting the PLL at personallibraries{at}gmail{dot}com. Also look out for even more new books that are forthcoming!
Posted by Personal Libraries Library at 2:24 PM