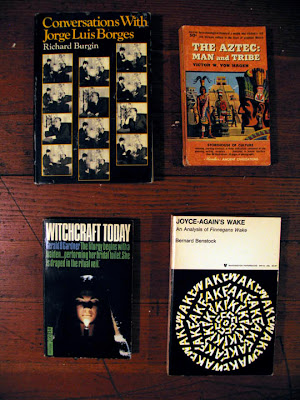 The past month has been busy here at the Library. Multiple new members (welcome!) have lead to many new books! They include the beauties pictured above and below from the Robert Smithson Personal Library. They span from literary criticism such as Bernard Benstock's Joyce-Again's Wake to the metaphysical study in Witchcraft Today by Gerald Gardner, as well as Victor Von Hagen's The Aztec: Man and Tribe. Some of these books were also donated by a private donor from her own personal library. The Library thanks you! 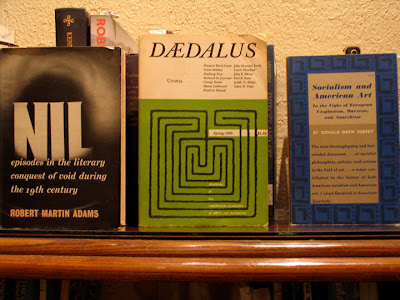 Other acquisitions include Richard Burgin's Conversations with Jorge Luis Borges and Flaubert's Dictionary of Accepted Ideas. In Flaubert's amazing, satirical Dictionary, you can find the following (New Directions, 1954: 16):

ASTRONOMY. Delightful science. Of use only to sailors. In speaking of it, make fun of astrology.
ATHEISTS. 'A nation of atheists cannot survive.'
AUTHORS. One should 'know a few,' never mind their names. 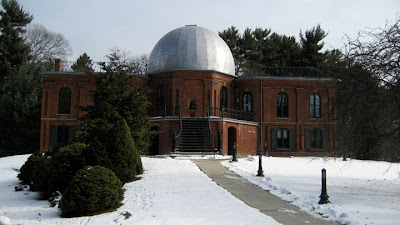 Flaubert's seamless segue from Borges to Mitchell leads me to recount my pilgrimage, of sorts, to the Maria Mitchell Observatory at Vassar College in Poughkeepsie, New York. The first building of Vassar, Mitchell lived and taught in the Observatory for many years. In fact, she slept in a cot in the classroom itself! The Observatory still stands, yet now contains multiple offices and a library resides in the observatory dome. The PLL finds this a particularly poetic library location due to Mitchell being a librarian herself. 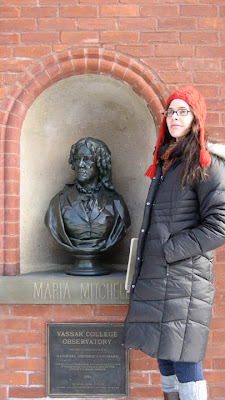 New acquisitions to the Mitchell Library include Madame de Stael's Corinne and Margaret Fuller's Woman in the Nineteenth Century. Both are 19th century feminist texts that point to Mitchell's suffragist roots.
Posted by Personal Libraries Library at 5:27 PM