"Six Years: The Dematerialization of the Art Object from 1966 to 1972" & "The New Novel from Queneau to Pinget" 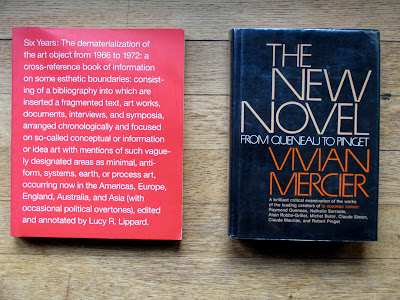 Two new and exciting books have been accessioned into the Robert Smithson Personal Library this week: Lucy Lippard's Six Years: The Dematerialization of the Art Object from 1966 to 1972 and Vivian Mercier's The New Novel from Queneau to Pinget.

Lippard's riveting book actually has a much longer title:

Six Years: The dematerialization of the art object from 1966 to 1972: a cross-reference book of information on some esthetic boundaries: consisting of a bibliography into which are inserted a fragmented text, art works, documents, interviews, and symposia, arranged chronologically and focused on so-called conceptual or information or idea art with mentions of such vaguely designated areas as minimal, anti-form, systems, earth, or process art, occurring now in the Americas, Europe, England, Australia, and Asia (with occasional political overtones), edited and annotated by Lucy R. Lippard.

Not to be outdone, the sub-title (of sorts) of Mercier's book is as follows: